This is a paperweight by Maude and Bob St. Clair of Elwood, Indiana.


Last week’s Blog was about Badge Paperweights and I’m delighted with the result. Alan Thornton and I are setting off on a research investigation of badge paperweights, so you will hear more about that in time. I am on the hunt for damaged badge paperweights so if you hear of one that’s for sale please let me know.

Meantime I have been working to update the many pages of the Glass Encyclopedia (www.glassencyclopedia.com) and my colleague Anne Yobunny has updated the Glass Links page (www.theglassmuseum.com/links.htm). Its fascinating work, leading me to up-date my knowledge of a wide range of glass. This week I’m writing my blog about St Clair glass. I hope you find it as interesting as I do.


The St Clair family and their glass


I’m going to start this story at the time of the Franco-Prussian war (1870-71), a time of great turmoil in the glass industry. Alsace and Lorraine had been two independent states North East of France which were claimed by both France and the German Empire. Through roads, railways and trade they were closely linked with France. In 1870 Prussia (North Germany) provoked France into declaring war and the Germans resoundingly defeated the French in less than two years. They imposed heavy penalties on France. They annexed the whole of Alsace and part of Lorraine so over the next few years many of the glassworks in that area became part of Germany and many glassworkers who thought of themselves as French found themselves in a new country. There was an exodus of French glassworkers to towns in Lorraine like Nancy and emigration overseas.  Both the Galle family and the Daum family were caught up in these changes, but that’s another story.

Amongst all this turmoil was the skilled French glass artisan John St. Clair and his wife Rosalie, their young son John and baby daughter Rosa. The ambitious plans of French refugees to build a huge French glassworks in Nancy were proving too expensive (they went bankrupt and were rescued by their principal creditor, Jean Daum, - I know,  that’s another story). John St Clair and his little family left for the United States where there was work for skilled glass blowers and they knew friends in the industry who had left France before them.

That brings us to late 19th century USA, where the glass industry was thriving thanks to the growth in population and to separation from Britain. The St Clair family settled in Crystal City, Missouri in the mid 1880s but a few years later moved to Elwood in Indiana  where a free supply of natural gas was causing a boom in the glass industry. Industrialists would lease or buy a patch of land where the gas was found, build a well and set up pipes to transport the gas to their factories. Excellent quality local sand contributed to the boom, and five major glass factories set up in Elwood by the turn of the century. One of these was McBeth-Evans, which opened in 1890 and commissioned a special train to bring over 350 skilled glass workers from Pittsburgh to work there.

John St Clair Snr and his son John were both recruited to McBeth-Evans . John Junior married in 1903 and in the first twenty years of his marriage to Ellen Carroll they had eleven children, five boys and six girls. John became known as Pop St Clair. All five of his sons trained and worked at McBeth-Evans when they were old enough.

Meanwhile the free natural glass was beginning to run out. Pipes had been laid to take the gas to factories as far away as Chicago and Indianapolis, and the pressure began to fall. Water got into the pipes and in cold weather when the water froze the supply of gas was unreliable. The effects of the Depression were also being felt and by 1936 the boom time in Elwood ended as suddenly as it had begun. Macbeth-Evans closed along with other factories and glassworks. There was no more free gas.
Pop St Clair and three of his sons accepted jobs at Dunbar Glass in West Virginia in 1938. Joe St Clair stayed behind to build a modest glassworks of their own and three years later the family returned to work together at St Clair Glass.

This factory operated in Elwood between 1938 and 1987, and since then the family tradition of glass-making has been continued by their nephew Joe Rice at the nearby “House of Glass”.
There were many ups and downs during those years. Joe St Clair himself retired in 1971 at which time he sold the glassworks but he was not long in retirement. After three years he returned to form another glassworks which he called "Joe St Clair's Art Glass" and continued there until near his death in 1987.

At the earlier date when Joe had retired and sold the St Clair glassworks (1971), his brother Bob St Clair set up another glass factory near Elwood, which he called "St Clair House of Glass". Bob and his wife Maude marked their glass "Maude and Bob St Clair" and the paperweight above is an example of their work. Their output continued the same St Clair traditions. When Bob died, his nephew Joe Rice took over this factory in 1987 and renamed it "Joe Rice's House of Glass". 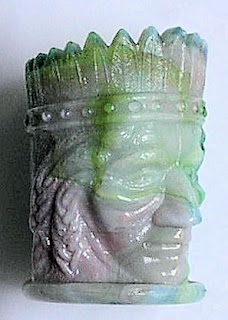 This information will now go into the Glass Encyclopedia. I hope, by the way, that you do find that website interesting too. (www.glassencyclopedia.com)