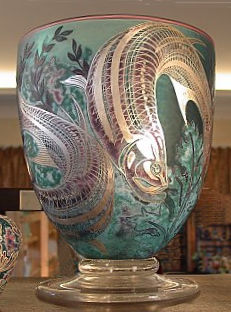 This is the most beautiful vase I have ever seen. Isn't it wonderful!

I couldn't afford to buy it, but when Jonathan Harris showed it to me at the National Glass Collectors' Fair some years ago, I took this photograph.

It was made by Jonathan at his glass studio in Shropshire, combining graal and cameo carving techniques. The procedure involves layers of hot coloured glass coated in clear crystal, rolled in coloured glass powders, and allowed to cool then carved, reheated, and more layers and more carving added, including layers of silver and gold leaf. When he worked with Richard Golding at Okra Glass (before his current studio) Jonathan's vases consisted of as many as eight layers, and since those days his work sometimes has even more layers.The result is totally stunning. 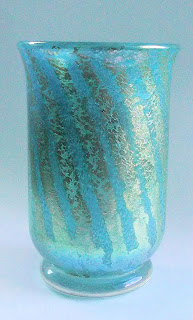 And here's the little label on its base. 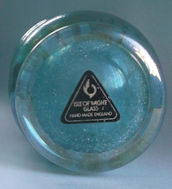 I know, I know, it doesn't compare to the vase by Jonathan (above). But it is pretty and I believe the Victorian range was designed by Jonathan before he left Isle of Wight glass.

I have continued updating the Glass Encyclopedia this week, Maybe you have time to take a look - www.glassencyclopedia.com