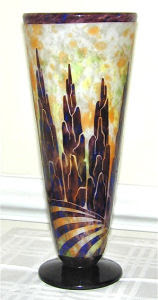 These beautiful vases by Le Verre Francais are explained in the new Glass Encyclopedia page on Schneider glass which features Thomas Karman's article about Charles Schneider and his glass. 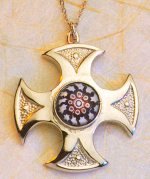 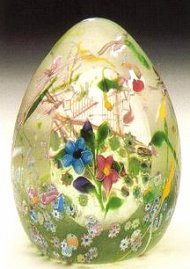 There is also a new page about Caithness Glass which features Rhona Burns and Angela's article covering the Caithness history, the people and their glass. These pictures above are just two of the many beautiful Caithness creations discussed on this new Glass Encyclopedia page.

Thank you for your support of the Glass Encyclopedia in the past. These changes will take it from just a source of information to a treasure trove of knowledge. Enjoy.

Merging the Glass Museum and the Glass Encyclopedia

Why? The Glass Encyclopedia is a useful alphabetical list of glass topics with information on a very wide range of glass. The Glass Museum, on the other hand, has detailed and in many cases unique information on glass topics. But unless you were looking for one of these topics you may not be aware of these very interesting articles.

So why not put the two together. By incorporating the interesting material in the Glass Museum articles into the Glass Encyclopedia we will have a very much improved Glass Encyclopedia, and much more easily accessible articles.This will benefit the authors of the articles, whose writing will be more widely read, and the readers who will find all this information more accessible.

This process may take quite a long time. The first combined page is about Cast Glass, and combines a brief account of cast glass with an article about the making of cast glass by Shona Firman, one of New Zealand's leading cast glass artist.  Click here to visit this new page. This is just one example of Shona's beautiful cast glass creations. 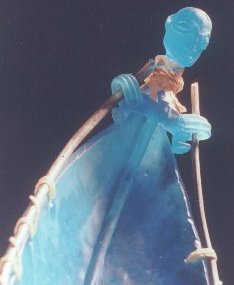 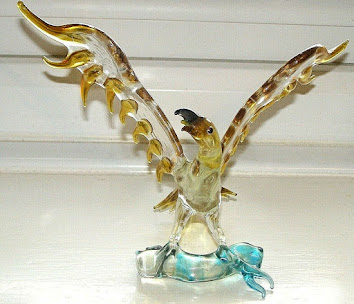 The story about its discovery goes that Mick Munns was looking through the Pirelli glass items on sale on eBay one day last year, and he came across this eagle, which he recognised as a Pirelli eagle that he had made when he worked at Pirelli.

He contacted the seller (Pat Irons) and told her. She later told me that Mick had confirmed it was Pirelli. Now to the story, he told me about these eagles. 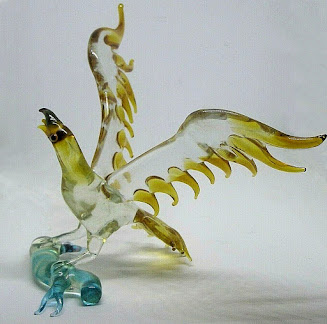 He made them during George Dunlop's time with Pirelli, and George brought a very valuable book about American birds into work and told Mick to copy this eagle from the book. Because it was an original edition of the book he wasn't allowed to take it to his workbench. He had to study the book and then go back to his bench and make what he had seen.

The company used to employ salesmen who took samples round various shops to get orders, and the eagle was popular. However, Mick only made about 20 of them because the packing boxes Pirelli used for these eagles were not suitable, and too many of them were broken on their journeys. So Mick then started making them out of Pyrex-type glass (borosilicate glass) and these clear glass ones were much stronger and Mick remembers making a lot of them.

Many years later after Pirelli had closed and Mick was employed by Wedgwood glass, he even made a few eagles for Wedgwood. I have seen his payslip from those days, so he was definitely employed making lampwork animals for Wedgwood, who marketed them with the name Flamecraft. We still have never seen a clear glass Pirelli eagle nor glass animals/birds with Flamecraft labels. 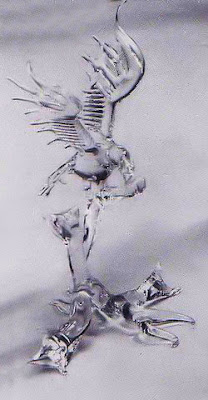 I have been working on my trilogy about Pirelli, Bimini, and Komaromy Glass for the past 20 years. After my introductory book on London Lampworkers, I published the Pirelli Glass book with Bob Martin in 2016, and the Bimini Book with Raymond Berger in 2019. The Komaromy Glass book with Christine Komaromy-Burley will be published early next year. Each of these books aims to be the definitive source about its subject, and when the Pirelli Glass book was published it included coloured photos and catalog pictures of the entire range of known Pirelli glass. Only one item that we didn't know about has since turned up - a square shallow dish with a Pirelli advertisement. 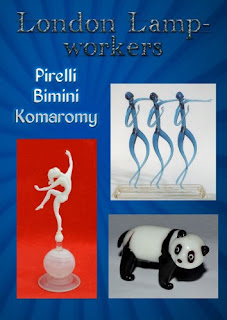 London Lampworkers
"A thoroughly enjoyable, informative and illuminating text that gives an introduction and overview to the renowned London based glass lamp-workers Pirelli, Bimini and Komaromy. Illustrated with examples from the range of their beautifully crafted works. The text gives the reader guidance on how to identify the respective lamp-workers' hand in what many may consider as mere trinketure. To the informed collector/dealer however here is sound advice on how to ensure the authenticity of items they may own or be thinking of acquiring for pleasure or investment. Included are reminiscences from those connected personally and/ or professionally in London based lamp-working." -Alsretro, UK 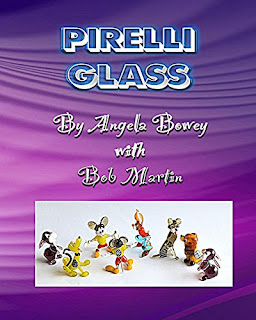 "This is the 'go to' reference book if you are interested in Pirelli Glass. It offers collectors a comprehensive history of Pirelli glass and its makers, from its inception in the mid 40s to 1980 when the company closed. The book is filled with colour photographs, original black and white catalogue photographs, stories and a miriad of information on Pirelli and Vasart glass." -Jackie S, Canada 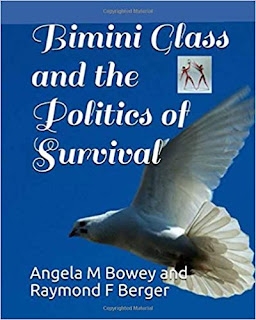 Bimini Glass
"After reading Angela Bowey’s encyclopedic book on “Pirelli Glass” I’ve been looking forward to her book on Bimini glass. The book is even better than I expected. It is a well written and informative and the pictures are fantastic. I learned so much about Bimini glass and its artists and how they fix into the history of the time .... " -Maxine, US
**********************
The Glass Encyclopedia is getting updated as I type. Take a look at this extensive source of information on glass.