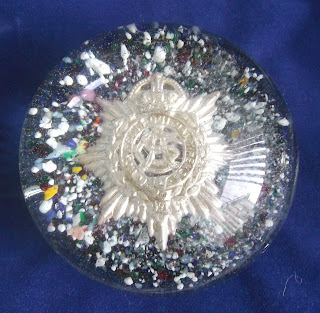 Today I'm going to write to you as if we were sitting down having a conversation. I've made my cup of tea, the room is warm and sunny and we're both sitting in comfy chairs. I'll wait while you get a cup of coffee/tea and get settled down.

Right. Here we go. I have decided, after a long life (lets face it) of jumping from one ambition to another, that I am basically a researcher and a writer. All those years as an academic followed by thirty years of collecting and writing about glass have ingrained into my soul the desire to find things out and share them with others. So today its Paul Ysart and my recent forays into his badge paperweights. Shall I wait while you have a think about that - or even a little rant on the subject.


OK. So I saw this badge paperweight (above) on eBay a couple of weeks ago and decided that since I don't have one in my collection, indeed I've never really examined one, so I should buy it. And while waiting for it to arrive I went off into my study to read up about these kinds of weights. Well, I can tell you there wasn't much there. Robert Hall's book "Scottish Paperweights" had only one example that I could find, a pedestal weight with an encased military cap badge and a paragraph about it. John Simmonds book "Paperweights from Great Britain" had four examples with their descriptions.


Both of these writers referred in their books to Dave Webber's article in the Paperweight Collector's Association Annual Bulletin for 1998 but my collection of PCA Bulletins doesn't go back that far. So, apart from confirming that Paul Ysart and maybe other members of the Ysart family had made these kinds of paperweights probably in the late 1930s, I was not much wiser.


Next I tried the Glass Message Board (www.glassmessages.com) where there have been a series of posts on this subject going back at least to 2005. Dave Webber wrote about one paperweight that had the badge floating above the frit base rather than lying flat on the pieces of coloured glass (November 2014). Several of the discussions on the GMB referred to paperweights of this kind being made in Belgium as well as in Scotland. But so far as I could see there were no references to where this information about Belgian frit weights is published. So what to do? I'm quite sure you are just now telling me lots of things I should do.

Anyway, I decided to seek out a copy of the 1998 PCA Bulletin and read Dave Webber's article, and whilst making that search I came across the 2016 update of Colin Mahoney's book "Masterworks: The Paperweights of Paul Ysart". So I ordered both of those on line and sat back to wait. And a week or so later I had all three of my purchases - the paperweight, Dave Webber's article and Colin Mahoney's book. Now what do I know that I can share with you?

Dave Webber's interesting article refers to an interview with the late Colin Terris of Caithness Glass describing how Paul Ysart had told him they made these badge paperweights "out the door of the factory" whilst working at Moncreiff's glassworks during the 1930s. Colin concluded that it was either Salvador, Vincent or Paul who made all of them. There is no description of what the process was for encapsulating a metal badge into molten glass other than to point out that there would be a danger of the glass fracturing due to differing rates of expansion and contraction of the metal relative to the glass, and that clearly the Ysarts had solved this problem. The problem of encapsulating hollow metal tunic buttons is also discussed, with the information that these tended to rise because they were hollow and so an air bubble was created underneath the button.

We all know, from countless descriptions, that Paul Ysart was secretive about his paperweight making. Even his apprentices were not shown all the tricks of his trade, and he would destroy a nearly-finished paperweight sooner than let one of his "secrets" be discovered. So it is no great surprise that there is no account in any of the books or articles I have read of exactly what the steps were in encapsulating a metal cap badge into a paperweight. But somebody must know. Dave Moir or Willie Manson or Peter Holmes? And if you know where it is written I hope you are going to tell me.

Moving on to Colin Mahoney's book on Paul Ysart (which I think is great) there's a short chapter about "Medallion or Cap Badge" paperweights and another about "Sulphides" which set my mind pondering. Again most of the text describes the known examples of badge paperweights and their features, with a little more information than other texts. But there is no account of how they were made. Colin interviewed Paul Ysart's son Salvador and there is an excellent account of how Paul made the sulphides for some of his weights. Cheap brooches were used to make plaster-of-Paris molds from which a replica of the brooch was created using the kind of clay out of which clay pipes were made. This replica was then painted (heatproof paint) ready to be heated up and enclosed in molten glass to form a paperweight.

So here's my question. Are we sure that these badge paperweights contain the original badge, or a clay sulphide painted gold or silver? All of them or just some of them? Some people must have broken examples of these badge paperweights. I'd love to handle one, and see some photos showing the broken metal insert. My alternative explanation goes like this. A soldier comes to the glassworks with his cap badge having seen his mate's paperweight with a badge inside. He asks Paul to enclose his cap badge. Obviously this isn't an instant process and the soldier is told to come back in a couple of days to collect his paperweight. That would give Paul time to make and paint a sulphide of the badge and enclose it in a weight. And it would explain why Paul had a large box of military cap badges and medals which he brought home one night (interview by Colin Mahoney with Salvador Ysart).

Obviously where the metal has been distorted by the heat, we are talking about a metal insert. But some of these badge paperweights show no distortion of the badge, which could therefore have been a sulphide. Until somebody writes the detail of how to enclose a metal badge into a paperweight without distorting it or causing the glass to crack, and confirms that Paul Ysart did it that way, we just don't know.

That brings me to the references to these paperweights having been made in Belgium. Can someone tell me a reference where I can read about these Belgian paperweights? Or maybe there are some that have a Belgian label, which I'd love to see.

I'll leave you for now. I hope I've made the case for some more research and a really good research-based article on badge paperweights. If Dave or Derek or Peter or Kevin want to volunteer for that, I'd be pleased to help.Thanks for your patience.

Angela
Posted by Angela Bowey at 01:18